Oregon Secretary of State Kate Brown and Senator Alan Bates (Medford) are proposing a new draft bill on river rights.   LC 48 (see the link to the pdf file of it at the top of the page) is modeled on a bill first brought up in 2005.  It’s being touted as the codification of the Attorney General’s Opinion #8281.

Much to our surprise at CWO, when we were inquiring about this bill last fall and why hadn’t we been informed, the reply from Senator Bates office was that they had been working with Common Waters of Oregon for 5 years on this bill.

This is not the case in anyway at all.  We have never been consulted on this bill or invited to discuss it.   It has left us wondering exactly why they would think they had been in contact with CWO, and if a lobbyist has claimed to be representing CWO, when they were not.   It’s perhaps a mystery we’ll never solve, but at least it’s now out in the open.

We pointed out this error and suggested that not only should CWO be invited, but there are many other associations with a keen interest in river rights, that would like to be invited to review this bill.   In a quick turn around, Kate Brown has called a meeting next  for next Tuesday and invited several groups to come review the bill with them.

As we regroup and try to figure out just how it is that they thought they had been discussing this matter with CWO, we’re willingly heading to the meeting to find out more about the intent and spirit behind this bill.  We also see several very poorly worded sections that could cause more bureaucratic nightmare than already exists.  Perhaps those are fixable?  We’ll detail those concerns and see if they are willing to make changes.

In a quick review, the bill seems very problematic with all new layers of bureaucracy for making river determinations and classifications.  It doesn’t fix the flawed Navigability process, it merely adds another layer of decision making and a whole new set of responsibilities for the Department of State Lands.   And it does not establish any clear governance or appeals process for which rivers or river segments they would designate as floatable and hence available for the public to use.   It would be calling on the DSL to not only be in charge of state owned lands, but be in charge of all issues, enforcement, etc, on waterways that may be private.

This seems to be opening the door to a possible conflict with Measure 37 or Measure 49, because by placing changes in land use and ownership onto lands, since measure 37, any new legislation that does this would entitle landowners to compensation.  The state has already lost much money embroiled in these issues.    In no way, do we want to create a river rights piece of legislation that will make the situation a legal nightmare of such proportions that jeopardizes all river rights in the public opinion.   We’re honestly still unsure if this bill would cause such an issue, but hope that next Tuesday’s meeting will offer some clarity on that matter.

Take a look at the bill and feel free to write to make your comments here , and pose questions that you would like cleared up about this piece of legislation.

In September 2009, The Source wrote a up a critical review of a new bill being sponsored by Senator Bates. Very little press has happened on this new bill, so we’re wondering how The Source got the scoop?

By the way, the source did a great job of explaining river rights! It’s long been the contention of CWO that it’s fairly easy to take away rights that no one knows or understands. It’s critical that newspapers do a bit of research and accurately relay the history of Oregon river rights and how strong they are. Good Job to TS!

In the last three years, the state of Oregon has begun to publish more river rights information.   They are making some progress that helps people and agencies understand the laws.   It’s not been fast, but it’s good to see the evolution.

Here’s the latest Oregon Department of State Lands (also referred to as the DSL) information on river rights.

However, this doctrine is not a license to trespass on private land. Anyone crossing private land to reach state-owned public land and waterways must have permission from the landowner. The landowner is under no obligation to grant this permission.

Waterways for Which a Navigability Study Hasn’t Been Conducted

In April 2005, the Oregon Attorney General issued an opinion which addressed the public rights associated both with waterways determined to be navigable and those for which the question of ownership of their submerged and submersible lands has not been addressed.

The opinion also examines the impacts of numerous Oregon Supreme Court rulings between 1869 and 1936 that established common law regarding public use of waterways. Based on this extensive review, the opinion concludes that the common law doctrine continues to authorize some public use of navigable-for-public-use waterways. Both the public and landowners along such waterways must allow the other to enjoy the waterway without undue interference, the opinion states.

A waterway is navigable-for-public-use if it has the capacity, in terms of length, width and depth, to enable boats to make successful progress through its waters. In addition to allowing use of waterways up to the line of ordinary high water for boating, the opinion means that the doctrine authorizes other water-dependent uses. Such uses include swimming, fishing on foot, hunting from a boat and other similar activities requiring the use of the water.

The opinion further means that the public may use the land above the line of ordinary high water only if the use is “necessary” for a water-dependent or incidental use of the waterway. For example, boaters may move cargo, people and boats over upland to go around a set of falls, but they must return to the area below the line of ordinary high water as soon as reasonably possible.
According to the opinion, the public must exercise reasonable and prudent care. Public users will have to pay for damage they cause if they act negligently.

Nevertheless, as discussed above, a person may use a state-owned waterway that has not yet been determined to be state-owned, according to the opinion. In addition, a person may use waterways that are subject to the public use doctrine. However, the opinion warns that in these situations, such a person risks incurring liability for trespass in the event that the waterway turns out not to be state-owned and not subject to the public use doctrine.

Be a Responsible User

Recreational use of state-owned waterways is a privilege enjoyed by many Oregonians and visitors. However, misuse and abuse of this privilege can lead to restrictions. The Department of State Lands and the State Land Board urge you to be a responsible user of public lands and waterways, obey all authorized closures, restrictions and postings, and exercise basic common sense, courtesy and consideration for others.

In addition to that information on their website, as of 2008, they have a handy publication on river rights. 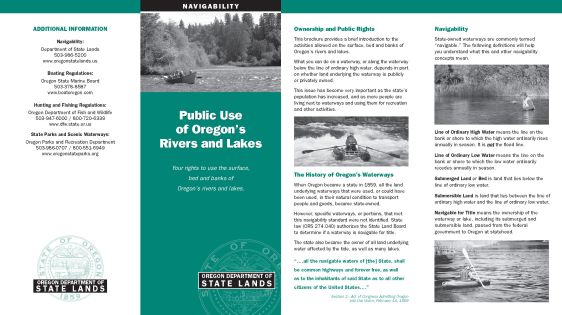 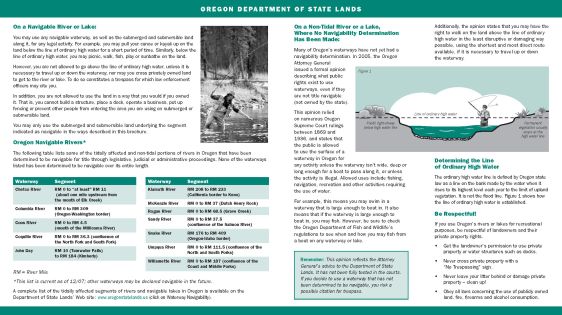